Despite recent U.S. action, national and global commitments to the Paris Climate Agreement are stronger than ever

Over the past several weeks I have had the good fortune to participate in a few key events in Europe and Mexico. Along with Joanna Costello and Liane Aziz of ISES HQ I attended Intersolar Europe in Munich, where ISES had a booth, which had many visitors. There I also participated in the Global Solar Council Board of Directors meeting. After Munich, I attended a meeting of a new Task within the IEA’s Photovoltaic Power Systems (PVPS) Technology Cooperation Agreement titled “Solar Resource for High Penetration and Large Scale Applications” in Bern, Switzerland. From there I traveled to London for the IEA Solar Heating and Cooling Executive Committee meeting. I then traveled to Mérida, Mexico to represent ISES at the Student Energy Summit (SES) and participate in a panel discussion on renewable energy. Immediately following the SES, and at the invitation of Lars Broman of the Strömstad Academy, Paulette Middleton and I went to Sweden where I gave a keynote address at the 12th International Symposium on Renewable Energy Education. We were joined fellow board members Monica Oliphant and Geoff Stapleton, along with Solar Energy Journal Editor Yogi Goswami, past President Anna Grete Hesnes, and Karl Boer Solar Energy Medal of Merit winner Larry Kazmerski. This week I am in Bari, Italy for the 4th International Conference on Energy Meteorology (ICEM 2017). These events are all supported by or partnered by ISES. At each event, I focus my talks on the opportunities for renewable energy and on the technical feasibility of a 100% renewable energy world, which offers a complete decarbonization of the energy sector. 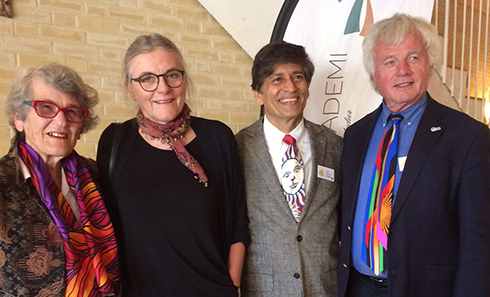 I am not listing my travel itinerary here merely to tally up my frequent flier mileage accumulation, but rather to point out that, at these meetings I am approached by many individuals who ask me, either following my talks or in private, about the regrettable decision made by the Trump Administration to pull the U.S. out of the Paris Climate Agreement. It is safe to say this is a decision supported by only a very small minority of Americans, and as you might expect I am not aware of anyone in the community of practice in which ISES is engaged, either in the U.S. or internationally, that understands the basis of this decision. The rationale presented by President Trump simply does not add up, and was based almost entirely on a multitude of misperceptions or emotional reactions by him and his followers. I believe it goes beyond the fact that he and many of his closest advisors and cabinet members are climate deniers; I believe the decision is an outcome of the influence the fossil industry has on his administration, the erroneous assumption that a transition to clean energy will result in significant economic costs to the country, and their mistaken impression that the Paris agreement is a mandate, or a binding commitment, that locks the U.S. into taking actions forced on its industry by foreign powers (which goes against Trump’s “America First” doctrine). Although the fact-checkers have easily disproven these perceptions, the President has nevertheless gained the kind of international attention from this decision that he so much enjoys, reminiscent of his TV reality show “The Apprentice” days. The true reality here is that, with his signature now on the Executive Order declaring the U.S. intentions, Trump is attempting to undo much of the very hard work done by the Obama as well as previous administrations who understand the perils that climate change will inflict on global economies and national security, and who strongly supported the global agreement coming out of Paris in December 2015.

Fortunately, the momentum has shifted away from the use of fossil fuels for energy production, both in the U.S. and globally, and in such a grand fashion that his Executive Order may really be meaningless in the long run. In fact, since Trump’s announcement, many countries have “doubled down” to express their strong support for the Paris accords and to reassert their intention to reduce greenhouse gas emissions. And within the U.S. many states and private citizens, along with many communities, mayors of nearly 100 cities, and large and small businesses, are pushing forward with even more aggressive programs to reduce greenhouse gas emissions. And (hopefully) due to the timeline associated with a country officially removing itself from the agreement, the U.S. could very well have a new President in the next four years who could potentially reverse this decision before the U.S. pullout becomes official.

Although ISES has not formulated an official statement of the U.S. action, it is safe to say here that the clear majority of our members and the members of our Sections strongly support the Paris agreement and encourage all participating nations (only Syria and Nicaragua have not signed…Nicaragua argued that the agreement did not go far enough!) to at least fulfill, if not greatly exceed, their Nationally Determined Commitments (NDCs), such as what we are seeing with the grassroots actions taken around the world. Trump’s decision was meant to appease his supporters and to fulfill a campaign promise. This was a mistake; many of these supporters can benefit from renewable energy programs. Any negative economic impacts from the Paris agreement or Obama’s Clean Power plan on his supporters have been negligible thus far.

ISES will continue to support the messaging on how actions to mitigate climate change by decarbonizing the end use energy sector go hand in hand with new economic development, benefits to human health and global ecology, and enhanced energy security for all people. Much of the current instability in the world can be attributed, in part, anyway, to disruptive climate-related events. Solar energy represents a solution that can mitigate both climate change and global upheaval.