The Century of Solar - Stories and Visions of Renewable Energy

This celebratory booklet, launched on the occasion of ISES SWC50 in December 2020,  tells the history of solar in short highlights, and provides a look into the future as well. The highlights, organized by decade, cover solar PV, solar thermal, concentrating solar power, solar architecture, PV in developing countries and ISES itself. Each section also tells special stories of some of the many pioneers in solar research, development and manufacturing. A total of 283 research profiles of research and industry pioneers were submitted by the start of the virtual conference. 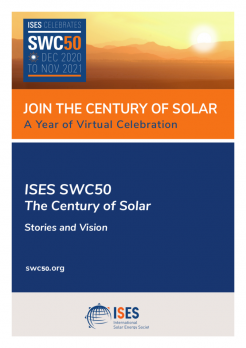 The booklet is available for download below as well as in a virtual flip-through version here.

From the Forward of the SWC 50 Booklet

Immediate Past President of ISES

Writing the Forward to this booklet, “SWC50 – A Century of Solar” is a great honor for me. When my good colleague Geoff Stapleton, who has worked many long months putting this booklet together, asked me to write this Forward, I accepted without hesitation. Geoff and I have been working together on the International Solar Energy Society’s (ISES’) Board of Directors for a number of years now. Even though I and others have also had input to this booklet, Geoff deserves significant credit for creating a vision and then developing the extensive content of this booklet.

The concept of SWC50, and this booklet that commemorates SWC50, came out of a few brainstorming sessions that I and other members of the Society held during various ISES Board meetings over the past couple of years. We were reflecting on how ISES is the oldest continuously operating solar energy society in the world, with its roots dating back to 1954 when the Association for Applied Solar Energy (AFASE) was formed in the U.S. state of Arizona. Perhaps not so coincidentally, this was the same year that Bell Telephone Laboratories patented the first commercial solar cell. ASAFE changed its name to the Solar Energy Society (SES) in the early 1960s and continued its advocacy and support for solar energy research, development, and deployment, and to report on its work through scientific conferences and technical publications. Late in that decade, with the SES running into financial difficulties, representatives from Australia, and in particular the Australian-New Zealand Solar Energy Society (ANZSES) invited the SES Board to jointly organize the first International Solar Energy Congress (SWC). The successful Congress was ultimately held in Melbourne, Australia in March 1970.

Following this landmark event, the SES also found a new home in Australia, developed a new charter, and changed its name to the International Solar Energy Society, with ANZSES and the American Solar Energy Society, or ASES (the successor to SES), becoming its first two Sections. Through the discussions of this history the Board recognized that, during 2020, ISES should celebrate the 50th Anniversary of this inaugural Solar World Congress. The celebration was planned to be held in Melbourne in conjunction with the Australia’s Asia Pacific Solar Research Conference in December 2020, offering a program that not only recognizes the solar energy achievements of the past 50 years but also discusses with global experts the opportunities for solar energy in the coming 50 years. Out of these discussions, SWC50 was born, with Geoff taking the lead in the event’s organization.

Tragically the coronavirus pandemic that took over the world in early 2020, impacting global commerce and travel and the lives of millions of families worldwide, forced the SWC50 planning committee into an alternative plan for an online celebration. Furthermore, an exhibition that had been planned in conjunction with the SWC in Melbourne was transformed into a virtual “ISES Museum”. Nevertheless, this booklet, designed as a permanent and living commemoration of SWC50, has remained a key vision for Geoff and the rest of the planning committee. Throughout the year Geoff has put immense time and effort into leading its development, and I am very pleased to be writing the Forward for this accomplishment. This booklet consists of several key components. First, the reader will find highlights of the history of ISES going back to 1955, as well as historical highlights of some of the key technologies that ISES has supported over the years: Solar PV, Solar Thermal, Concentrating Solar Power, Buildings and Architecture, and PV in the Developing World. These historical highlights, organised by decade, were developed from a number of historical books and documents, as well as personal recollections of many people who have been involved in ISES and the technology developments throughout the decades. In particular I want to highlight one key source of information here: The two-volume “Fifty-Year History of ISES”, published in 2005 and edited by Prof. Karl Boer of the University of Delaware. Karl, who passed away on 18 April 2018 at the age of 92, played many key roles with ISES and was a stalwart supporter of solar energy research and development. In the late 1980s he created the prestigious Solar Energy Medal of Merit at the University of Delaware, of whom the first recipient was U.S. President Jimmy Carter. Through the years the medal has been awarded to many distinguished pioneers in solar energy development, many of whom are ISES members.

Second, the reader will find brief biographies of over 250 research and industry pioneers, also organised by decade, who have played key roles in the remarkable success of solar energy development and use over the years. Given that this booklet is a “living document”, we look forward to adding many new pioneers in the years to come. Third, this booklet provides highlights of the many partners and supporters who have helped make this book, as well as all of the activities associated with SWC50, possible. We deeply appreciate the support of these organizations who are also pioneers in their own right.

The booklet then closes with a summary view of the future of renewable energy, in particular as governments deal with the dual crisis of providing economic stimulus to address the COVID-19 crisis in the short term and the significant threats of climate change in the longer term. A brief outline of areas in which ISES expects to focus its work is included in this summary.

And finally, the actual program for the inaugural SWC1970 in Melbourne, and the key organizers who made that Congress possible, is provided in an Appendix at the end of the booklet.

Over the past half century solar energy technologies have evolved from curious laboratory experiments with limited commercial applications to elegant and low-cost technologies that provide, together with storage systems, reliable electricity, heating and cooling, and mobility services virtually everywhere and at almost any scale, from remote and off grid applications, to bulk energy supply. These technologies have clearly demonstrated the value they offer to the sustainable development of all communities and populations, providing low-cost, reliable, non-polluting energy services in virtually any location on earth. ISES is very proud of the role it has played in developing and advocating for these technologies and looks forward to the next half century where these technologies will provide an economically-viable and socially-acceptable solution to 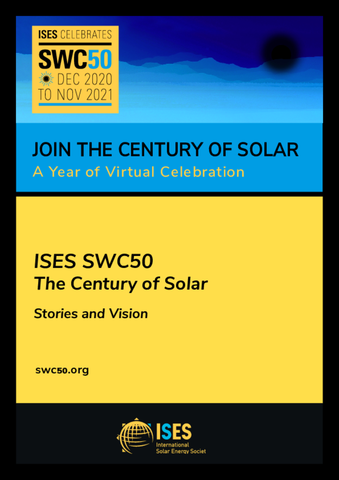