Paulette Middleton (ISES Secretary) and I travelled to San Francisco to participate in the 11th annual Intersolar North America (ISNA) Conference and Exhibition, held this year on 9 to 12 July.  Both the conference and the exhibition took place in the Moscone Center, since the conference facilities at the Hotel Intercontinental are under renovation. As in recent years, ISNA, which is run by Solar Promotions GmbH (an industry partner of ISES), has teamed up with Electrical Energy Storage-North America to fill Moscone West with nearly three full floors of cutting-edge exhibits on solar energy and electrical storage products and services. And once again, ISES has teamed up with its U.S. Section, the American Solar Energy Society (ASES), and the ASES local chapter NorCal Solar, to host a large booth space shared by the three organizations. Our booth was positioned at the entrance to the third floor of the exhibit hall, which also happened to contain all of the conference facilities, so we had excellent traffic passing by, especially on those days when the Conference sessions were underway

For the opening ceremony we had the world-renowned author and thought leader Tony Seba give an impressive and inspiring presentation based on his most recent book “Clean Disruption of Energy and Transportation – How Silicon Valley Will Make Oil, Nuclear, Natural Gas, Coal, Electric Utilities and Conventional Cars Obsolete by 2030”. His entertaining presentation showed how technology disruption is quickly leading us to a future of sustainable energy and transportation. His keynote address was made possible by the efforts of Dr. Eicke Weber, ISES Vice President and also the Chairman of the ISNA Conference, who had personally invited Tony to speak at the opening ceremony. Also during the opening ceremony California Gov. Edmund G. Brown Jr. was honored with the Champion of Change Lifetime Achievement AWARD, presented in partnership with the California Solar and Storage Association (CALSSA), for his unwavering commitment to solar industry advocacy over the past three decades. Although Governor Brown was not able to be present to receive the award, Eicke was making plans to personally deliver the award to him in Sacramento later in July.

At recent ISNA’s ISES has worked with ASES to organize several sessions as part of the conference program. This year we hosted two panel discussions, both held after the opening ceremony on July 12: “The Road to Global 100% Renewable Energy” and “Regional and Local Initiatives Towards 100% Renewables”. The key takeaways from the first session, moderated by Paulette Middleton, included the rapidly-increasing role that PV technologies are playing in the electricity sector, which in turn is allowing that sector to grow its role in meeting our end use energy requirements, especially in the transport but also in the heating sector.  A particularly interesting example of the significant role that PV can play in meeting the energy requirements for the state of Minnesota was given by Dr. Marc Perez, a researcher at Clean Power Research and the son of ISES Farrington Daniels awardee Dr. Richard Perez. His talk was followed by an excellent presentation from Dr. Sarah Kurtz of the University of California at Merced on how the expansion of the electricity sector can get us to 100% renewables more quickly. Then Suzanne Leta of Sunpower Corporation provided an informative overview of the role of industry in achieving 100% renewables.

The afternoon session on regional and local initiatives was moderated by Diane Moss of the Renewables 100% Policy Institute, and featured Renee Sharp of Grid Alternatives who spoke on the importance of equity while achieving 100% renewables, Nate Owen of Ampion talking about Community Power Aggregations, Brandon Peck of Flywheel Government Solutions, serving as a representative of the Copper Institute, and Debbie Raphael of the City and County of San Francisco, who talked about the experiences of San Francisco in its efforts to achieve 100% renewables. Both sessions were well-attended and included considerable audience participation.

Another highlight at ISNA was a presentation of the new feature documentary titled “Point of No Return”, a film of the 40,000-km round-the-world flight of the first solar-powered airplane, the “Solar Impulse”. After seeing the extraordinary clips from this documentary we met with the San Francisco-based filmmakers, Quinn Kanaly and Noel Dockstader, as well as one of the Solar Impulse pilots, André Borschberg, to discuss how ISES can collaborate with the filmmakers to help engage audiences to create a dialogue around sustainability and to support the message for accelerating the transition to 100% renewable energy. The filmmakers are developing an educational outreach initiative to bring the film and related curriculum guides and classroom activities around sustainability and renewable power to middle and high school students across the US and elsewhere, with a particular focus on underserved communities, and both ISES and ASES are exploring ways to support this initiative. 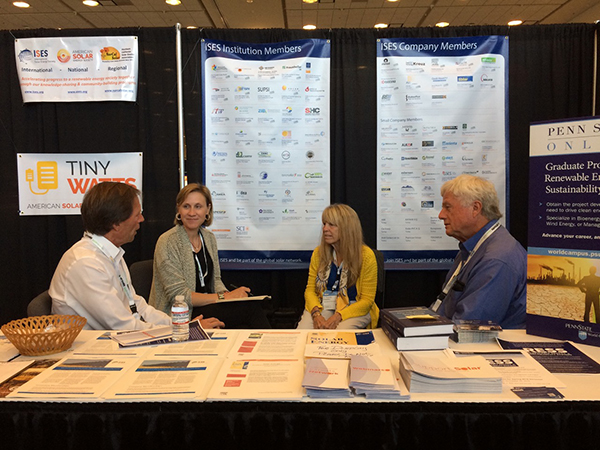 ISES continues to present at events such as these the message that a target of 100% Renewable Energy is technically achievable at national and regional (and ultimately, global) levels, and that innovation and technology disruption is essential for achieving such a target. Paulette and I were also very pleased with the opportunity to meet the many ISES members that passed by the booth, and to welcome the many potential new members showing a strong interest in the messages and activities that our Society is supporting.