In December 2018 the International Solar Energy Society will launch its latest publication "Renewables in the Grid - Dispelling the Myths". Over the last months, ISES has developed a series of infographics to clarify commonly claimed shortcomings about renewable energy, the first in this series addresses renewable energy integration in to the grid.

Each of the eight infographics introduces a common "myth" and dispels it using the latest research and results on the irrefutable success on the integration of renewables all around the globe. These infographics were developed as a tool to help when discussing renewable energy with friends, family, colleagues and decision-makers to strengthen the voice of renewable energy.

Starting in December, ISES will release insights leading up to the official launch of the publication just in time for COP24 in Katowice. Follow the ISES homepage, the different ISES social media channels such as Facebook, Twitter and LinkedIn to catch a first glimpse of the infographics in early December!

Here, a first glimpse on one of the graphics - more insights will follow! 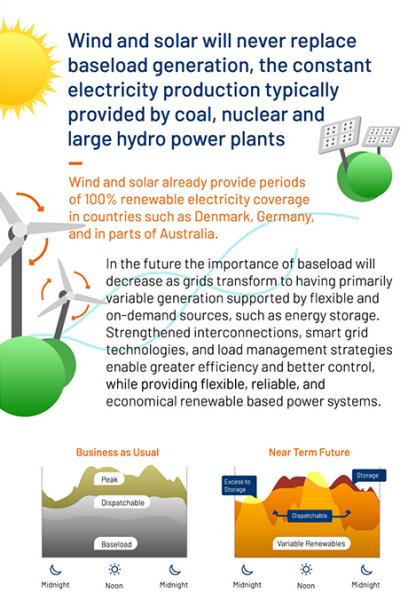