The 27th session of the Conference of Parties (COP) of the United Nations Framework Convention for Climate Change (UNFCCC) was held in Sharm El Sheikh, Egypt from November 6-18. The COP brings together the 193 signatories of the 2015 Paris Agreement to take action towards achieving the world’s collective climate goals to mitigate global warming to 2 0C, and ideally no more than 1.5 0C, above preindustrial levels.

Building on the outcomes and momentum of COP 26 in Glasgow, nations were expected to demonstrate at COP 27 that they are turning their commitments under the Paris Agreement into action. The delegates came together to discuss, negotiate, and renew their Nationally Determined Contributions (NDCs) to address climate change.

Key, and Missing Outcomes of the COP

The concept of Loss and Damages became the key negotiating point at COP 27. The Executive Committee (ExCom) of the Warsaw International Mechanism for Loss and Damage was established at COP 19 to guide the implementation of the mechanism. COP 27 committed to creating a Loss and Damage (L&D) fund that, if details can be worked out at future negotiations, will provide aid to vulnerable countries impacted by the irreversible harms of global warming caused by the historic GHG emissions from developed countries. This agreement is viewed as a significant achievement - a deal that was clearly in question before the start of the Conference.

Despite the success of the L&D negotiation, a major failure of COP 27 was the lack of agreement on phasing down all fossil fuels and building on emissions-cutting commitments made at last year’s UNFCCC summit in Glasgow.

No new accord was adopted that increases ambitions on lowering emissions or taking new steps to preserve the 1.5 0C global warming limit. Strikingly, the use of renewable energy as a mitigation strategy seemed almost forgotten in this year’s final negotiations.

In fact, the focus of the delegate negotiations, and the ‘COP EXPO’ pavilions and side event presentations was primarily on climate change adaptation, a just energy transition, the social and economic impacts of climate charge, and climate-driven migrations of affected people.

While adaptation measures are important and necessary, the critical focus must be on mitigation and abatement of CO2 and other GHG emissions with ongoing major implementation of renewable energy technologies playing the key role.

Robert Youngberg, ISES Board of Directors, served ISES as the Observer Delegate at COP 27 working on several events in which ISES, collaborating with its partners, played a key role.

For the first three days of COP 27 ISES shared a booth with Solar Cookers International (SCI) in the exhibition area of the Blue Zone. The booth was directly across the large Egypt pavilion and generated constant visits and interactions from COP 27 attendees and dignitaries.

Stronger Together: Showcasing Success of Renewable Energy Technologies Working for the Energy Transition Side Event

As ISES is an UN-Accredited NGO, we have the opportunity to organize and participate in official side events at the COPs. This year we worked with two of our REN Alliance partners, the World Wind Energy Association (WWEA) and the World Bioenergy Association (WBA) as well as others to hold a side event focusing on the vital role renewable energy must play in addressing major energy supply challenges in meeting climate goals. We were pleased that Dr. Bertrand Picard of the Solar Impulse Foundation was available to give an inspiring opening presentation, and that Julia Souder of the Long Duration Energy Storage (LDES) Council could serve as a panelist (Lidia Aviles of LDES Moderated the panel discussions). Robert, along with Mohamed Helmy (BayWa r.e.), spoke on behalf of ISES, Christian Rakos spoke on behalf of the WBA, and Stefan Gsänger and Zeeshan Asfaq spoke on behalf of WWEA.

ISES-Organized Event at the Wind and Solar Pavilion

Dave Renné, ISES Immediate Past President, collaborated with the Global Solar Council (GSC) in organizing and moderating an event at the Wind and Solar Pavilion, one of the few renewables-focused pavilions in the Blue Zone. The Wind and Solar Pavilion was a joint activity of the GSC and the Global Wind Energy Council (GWEC). ISES, a member of the GSC Board of Directors and Chair of the Technology Committee of the GSC, identified several speakers for the “Standards and Quality of Installation of Solar PV Rooftop Projects- -Best Practices” event held at the Pavilion on Thursday, November 17.

A Sunny Future for Renewable Energy Without the COPs?

The COP process is structured under primary areas: The Official Delegate process that is critical for the climate negotiations, and for providing information, making projections, setting goals, defining policies, and holding nation states accountable for implementing their own Nationally Defined Contributions; and the Observer Delegate area, known as the ‘Blue Zone’ and the ‘COP EXPO.’ where tens of thousands of individuals, organizations, and country representatives collaborate and share information, typically on projects occurring through local and grassroots actions. Thus, the Official Delegates focus on top-down, national level climate negotiations, while the Observer community is focused on the grassroots, bottom-up developments taking place to mitigate and adapt to climate change. Sadly, it does not appear these two communities have sufficient opportunity to interact with each other, resulting in a somewhat bifurcated experience for those wishing to influence the climate negotiation process.

COP 27 Key Takeaways and the Role for ISES

There is a tremendous opportunity for renewable energy to meet the ever-growing energy demand by developing countries, and a key role for ISES to play here. Renewable energy is meeting the need to mitigate and abate fossil fuelled electricity. Renewable energy is poised to provide primary energy for the heating and cooling, transport, buildings, and industrial sectors. Key takeaways from the COP, including from the side events organized by ISES and its partners, include:

Given ISES’s vision of a 100% renewable energy world used efficiently and wisely, and it is global reach, credibility, and experience, ISES will continue to play a significant role in addressing climate change through clean energy provided by solar PV, solar thermal technologies, and renewable energy storage.  ISES through its continued involvement in the UNFCCC annual COPs and building on its ongoing relationships with organizations such as Solar Cookers International, International Renewable Energy Agency, Global Solar Council, Ren Alliance, REN21, International Energy Agency, International Solar Alliance, Long Duration Energy Storage Council, and others will continue to play a key role in addressing the climate crisis. 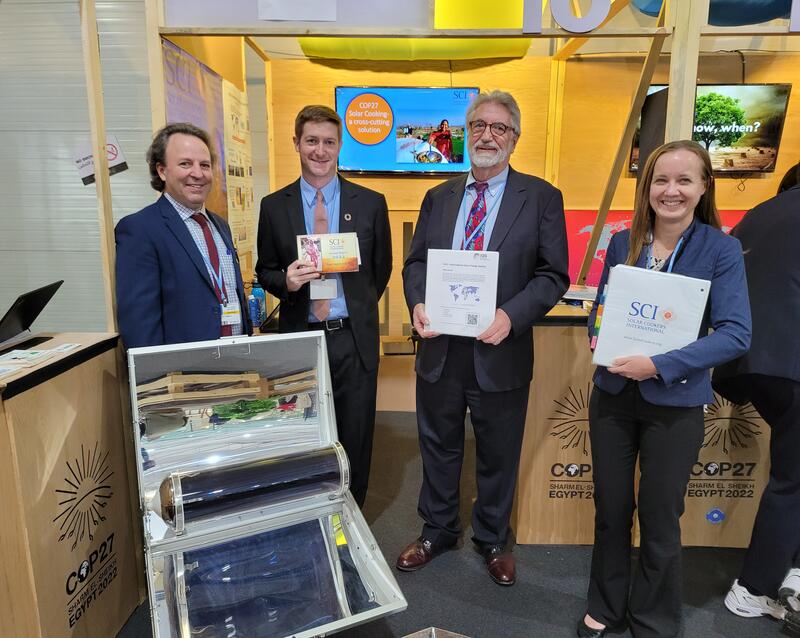