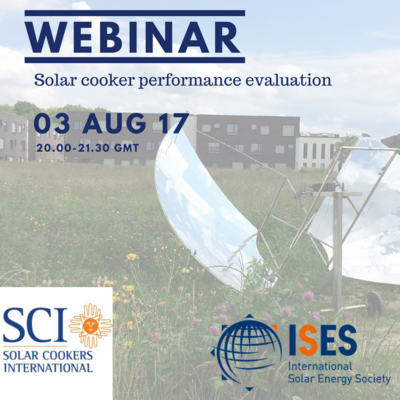 This webinar is organized together with Solar Cookers International.

Solar cooking uses free solar energy for no-emissions clean cooking. There are numerous commercial products and open-source designs for solar cookers; however, not all solar cookers are equal. The solar cooking sector has expressed the need for an independent, international organization to develop the capacity for testing solar cookers. Solar Cookers International (SCI), a non-profit international organization and global convener of the solar-cooking sector, has responded to this need by developing the SCI performance evaluation process (PEP) for solar cookers. SCI has also designed and built open-source, low-cost, portable PEP testing stations that apply the ASAE S580.1 protocol for Testing and Reporting Solar Cooker Performance. This webinar will focus on how solar cooker evaluations can: 1) provide users with information they need to select the appropriate device for their needs, and 2) hold manufacturers to a public accountability standard. 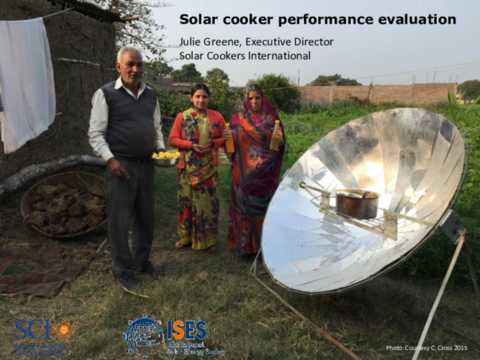 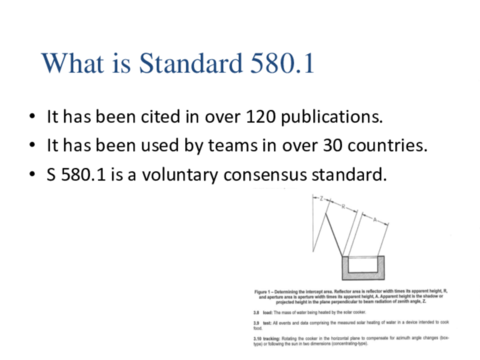 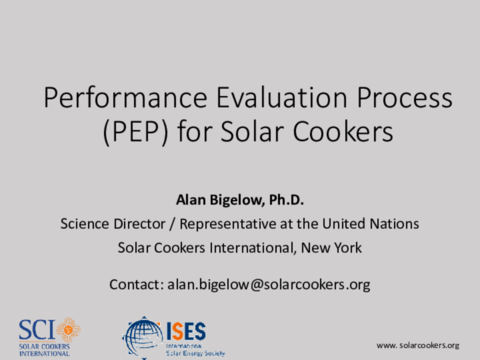 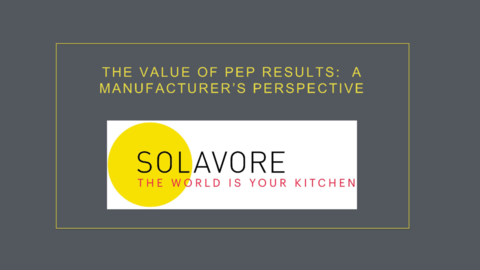 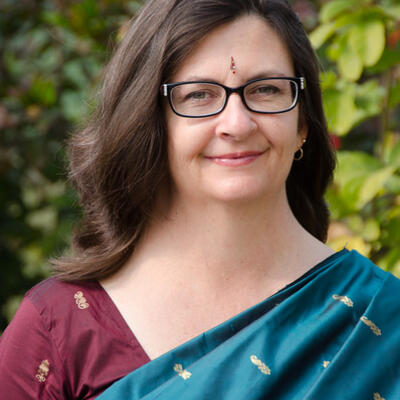 Julie Greene leads international solar cooking advocacy, education, research, and networking activity. Greene leverages global expertise to drive solar cooker technology adoption through more than 500 partners in 133 countries.
Leading the strategy for advocacy, she exercises SCI’s special consultative status with the United Nation's Economic and Social Council (ECOSOC). Greene speaks on behalf of the global solar cooking sector, offering expertise and responding to requests for cooking and water pasteurization energy solutions on an international scale. Greene is editor of the SCI Digest, and is coordinating a solar cooker performance evaluation process that harmonizes with the International Organization of Standards 285 standard for clean cookstoves. SCI’s work focuses first on the women and girls who live on less than $2 a day (USD) who also pay the highest human cost for their cooking energy in the world’s poorest regions.

Greene was awarded the Suman Foundation’s Suryamitra Award in 2015. She was nominated for the Outstanding Women Leader Award for visionary leadership by the National Association of Women Business Owners, Sacramento Chapter, 2016. She is a Climate Reality Leader (Denver 2017). Languages: English, French. 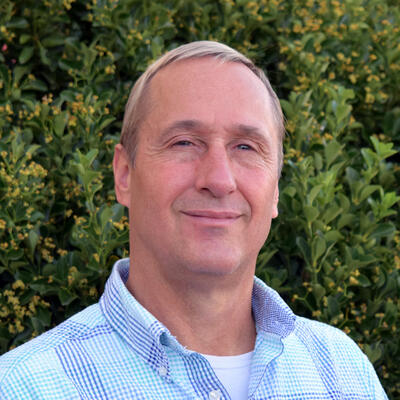 Paul Funk was trained in Mechanical Engineering.  While he was a graduate student at the University of Minnesota he spent a semester in Africa.  His passion for solar cooking began in Tanzania when he saw women spending 20 hours a week foraging for wood.  His MS in Agricultural Engineering focused on solar cookers made of indigenous materials.

He continued work on solar cooking at the University of Arizona where his PhD research focused on identifying which parameters most impact thermal performance. In all three settings it was important to accurately quantify the influence of design changes.  These experiences supported his leading the test standards committee and drafting the document that became S-580. 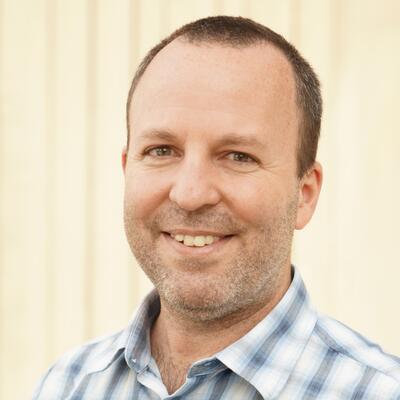 Alan is a physicist who started solar cooking in 2008. He has led solar cooking workshops locally in New York and internationally in India, Nepal and Haiti. He participated in a solar expedition in Nepal where during nine days at high altitude all meals were prepared using portable solar cookers. He designed solar-energy workshops as a Scientist-in-Residence at the Hudson River Museum and he included solar cooking in a course on sustainable engineering he designed and taught at Columbia University’s Science Honors Program.

Prior to joining Solar Cookers International, Alan had a 15-year physics research career at Columbia University Medical Center developing innovative technology for radiation-biology studies. He has authored numerous peer-reviewed journal articles and is listed as an inventor on a patent for a safe sterilization method that uses a specific range of ultraviolet light to selectively damage bacteria and viruses while not harming human cells.

Alan received a Ph.D. in Physics in 2000. He is also an accomplished musician and co-founded a solar-powered band that combines science and music to raise awareness and educate about environmental issues and solutions. He is a passionate solar chef and is often solar cooking at home or in public. Languages: English, French, Thai, Hindi. 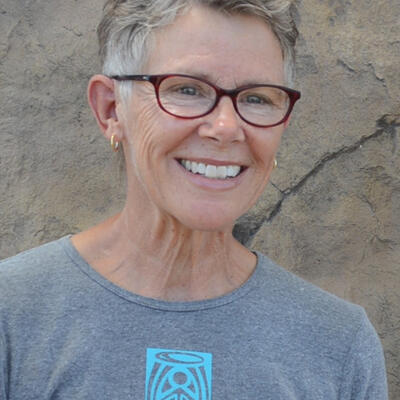 Anne started Solavore after a successful career in hi-tech. She cut her teeth at Hewlett-Packard and ended in global B2B e-commerce.  During her corporate years Anne fed her soul by mentoring young women and helping build schools in Africa.

Today she divides her time between a sailboat in Puerto Rico and an off-grid island cottage in the Long Island Sound.  Wind and sun – and her cellular modem - play prominent roles in her life.

Solar Cookers International’s mission is to spread solar thermal cooking technology to benefit people and environments. We work to solve the problem of inadequate household energy facing nearly 3 billion people on our planet.  Since human health, quality of life, and environments are affected by cooking fuel choices, we offer a solution to the difficult choices nearly half of all families make every day: whether to buy fuel, or to buy food and other family needs.  The sun’s free energy is a viable solution for all who live where the sun shines. Solar cooker technology is a sustainable and environmentally responsible tool which helps families fight poverty and disease, and changes women’s and children’s lives for the better.   What distinguishes Solar Cookers International is our combination of projects, partnerships, advocacy and outreach to the global solar cooker community.  We engage and energize the Solar Cookers International Network, supporting more than 500 organizations and individuals around the world to share solar thermal cooker knowledge, particularly with those who have the greatest need.  Early in its history, Solar Cookers International identified an urgent need for refugees and villagers in Africa to cook and pasteurize water, and SCI designed a panel solar cooker, the CooKit, to meet this need.  Today, we work with partners globally to address health and energy needs in a variety of sensitive populations and environments.  Solar Cookers International provides information and connects you to the partnerships you need to bring simple, effective and appropriate solar thermal cooking technology to people who are interested in changing their lives by changing their cooking tools.  Through our efforts, SCI combats poverty, supports local economies, and preserves human dignity. We are motivated to change and save lives with solar thermal cooking technology.