The Grand Renewable Energy 2018 (GRE2018) International Conference and Exhibition was held at the Pacifico Yokohama, Japan on 18-22 June. This major event – occurring every four years since 2006—is held together with ISES, which serves as a co-organizer. I gave a welcoming address at the Conference opening on June 19, and a keynote address at an ISES/JSES (Japan Solar Energy Society) Workshop titled RE100 in the World and Japan. I also moderated a panel session on Terawatt-Scale Photovoltaics as part of a special NEDO (New Energy and Industrial Technology Development Organization) Session titled “Renewable Energy Makes New Era – to realize a Low Carbon Society”. I was especially honored to receive their Renewable Energy Ensembles Award, along with Prof Emeritus Kosuke Kurokawa, as a token of their appreciation for supporting these conferences since 2006. 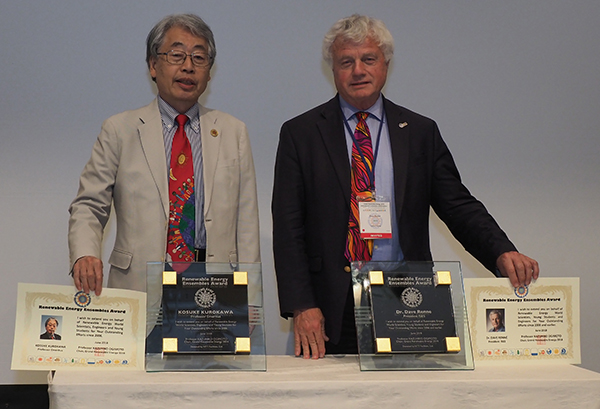 In my welcome speech I noted that ISES has had a long tradition, beginning back in 1954, of supporting R&D in solar energy technologies. Through our ISES Solar Energy Journal, our Congresses and Conferences, and our extended international membership, we have encouraged further research in all solar energy technologies, and today we can be proud of the tremendous success that these technologies now have in the marketplace, and the ever-growing role they are playing in meeting our end use energy demands.

I noted that ISES will continue its leadership role in being the global voice for renewable energy. Besides our support to the research community to continue to improve on the reliability and bankability of these technologies, and to ensure they are the most cost-competitive technology to deploy in our energy system, we are pushing for best practice policies and financial mechanisms that level the playing field for renewable energies. Conferences such as the GRE2018, as well as ISES’ own Congresses, provide a key opportunity for the country of Japan as well as the international community to exchange information about the latest technical trends, policy instruments, and financial opportunities for renewable energy technologies.

As pointed out in the recently-released REN21 Global Status Report 2018, renewable power accounted for 70% of net additions to global electrical generating capacity in 2017. In many places around the world wind and solar technologies are now the most cost-effective way of adding new capacity to the electricity grid. Stated in another way, the levelized cost of energy for grid-tied wind and solar plants has actually dropped below the costs for traditional facilities powered by fossil fuels in many regions, making wind and solar the fastest-growing energy source globally.

Nevertheless, the global emissions of carbon dioxide which results in human-caused climate change continues to increase, despite encouraging signals that these annual increases may soon be leveling off. Nearly half of all the carbon dioxide emissions that will result in a 2 0C warming, the level at which most climate scientists agree we should not exceed in order to avoid consequential human and ecological disruptions, have already been emitted into the atmosphere since the beginning of the industrial revolution. At current emission rates, the remaining half could potentially be emitted by the middle of this century. What’s more, nearly a third of total anthropogenic carbon dioxide emissions are the result of land use practices that are somewhat independent of the energy sector. So, our deployment of clean, renewable energy technologies must increase at a much greater pace than what we are currently seeing around the world in order to achieve our global climate mitigation goals.

Wind and solar technologies nevertheless introduce challenges to our energy supply system, in part because of their distributed nature and the variability of their output, which we cannot always easily predict. Thus, our energy system itself must go through a transformation that makes it far more flexible and resilient to accommodate these technologies. Regional and national policy initiatives are working to stimulate this transformation, and new financing mechanisms are being put in place to improve the investment environment and competitiveness of these technologies. In parallel, the energy sector is responding to the demands for a carbon free system by taking innovative steps towards a more resilient, reliable, and flexible energy supply. The transformation taking place will bring universal energy access and independence, economic stability, and a healthy environment to our global society. Showcasing these actions at conferences such as GRE2018 as well as our own Congresses is exactly the role that ISES is playing in the international renewable energy community. 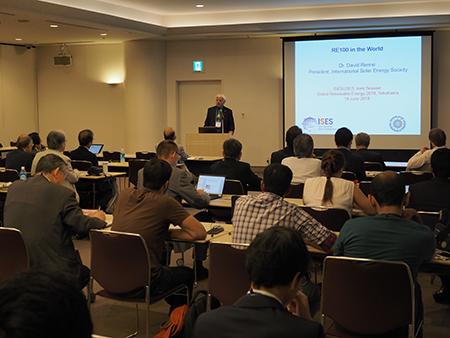 The ISES-JSES workshop at GRE2018

Events such as GRE2018 are important to Japan as the country works to reduce its dependency on traditional energy systems, especially nuclear energy, which was its primary source of electricity until the Fukishima disaster of March 2011. The country implemented a feed-in tariff (FIT) in 2012 which has stimulated a 26% PV growth rate (Japan’s PV market size has become the fourth largest in the world since the introduction of the FIT). In addition, Japan has established a target of 22-24% renewables by the year 2030 (up from 15% currently). However, much of their renewable energy program is financed through an energy surcharge, and there are also plans to restart many of the nuclear power plants that were idled after the Fukishima event, despite continuing widespread opposition to this decision.  To help bring down the high cost of renewables the country will be shifting to an auction system, setting midterm price targets, and promoting cost reductions through technological advances and R&D support. An area of particular interest is in the utilization of power-to-gas technologies, especially the use of hydrogen as an energy carrier, to help increase the overall energy supply and to manage the variability and imbalances in their power system. The country is facing many challenges to decarbonize the energy sector, but they are establishing aggressive policies, targets and programs to meet these challenges., ISES will continue to support their programs by raising awareness of the significant role large-scale renewables can play in meeting their future energy needs.

I want to express my deepest appreciation to all of the organizers of GRE2018 for including ISES in a very special way in this major event…an event important to Japan, the region, and the entire world.