A new urgency for Earth Day

Last Saturday, 22 April, was the 47th Annual Earth Day, celebrated in 192 countries around the world. This year the event took on a new important movement…the March for Science , which was observed in parallel with Earth Day in many countries. In the U.S., the March for Science was motivated by “… an alarming trend toward discrediting scientific consensus and restricting scientific discovery”. Many scientists stepped out of their comfort zones to make their voices heard in these marches (one sign seen at a march read “You know things are serious when the introverts arrive”), but the urgency is real. For example in the U.S., President Trump and his administration have shown a near-total disregard for scientific discovery and understanding of scientific fact, particularly with respect to climate change, preservation of natural environments, and protection of clean air and water. Their “alternative facts” are fed by groups such as fossil energy companies and lobbyists, and appear to be echoed with an increasingly loud voice in other countries as well. The March for Science brought the normally non-political scientific community into the streets to demonstrate for political decisions based on facts and scientific evidence, and against science denial practiced by an elite, well-paid minority out to protect their own self interests against growing public discontent with the consequences of their ideologies.

Prior to Earth Day, at the invitation of Mdme. Mi Yue and Ms. Qun Wang of the Shanghai New Energy Industry Association, I traveled to Shanghai to give a keynote address at the SNEC2017 11th International PV Power Generation Conference and Expo. The conference attracted hundreds of industry representatives and PV researchers from around the world. In conjunction with the conference was a massive exposition of approximately 1500 companies all working in the PV industry, filling 15 hallways with their exhibits. In my talk I summarized the results of the IPCC 5th Assessment Report. This report shows that, In order for global warming not to exceed 2 °C by the end of this century, our energy system must make a rapid transition to carbon-free technologies over the coming decades to bring carbon emissions from the entire energy sector down to zero within 50 years. Then I show that, as renewables have grown to a viable global enterprise in the past two decades (my talk focused on solar PV), due to more efficient and reliable technologies, growing private investments and plummeting system and component costs, a goal of 100% renewable energy supporting all end use energy sectors is not only achievable with favorable policies, but essential, especially given the economic, environmental, and energy security benefits. 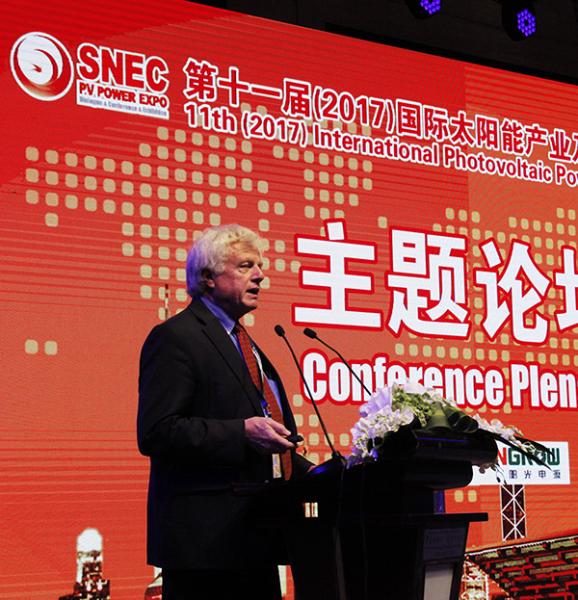 The complexities of our climate system and the ways in which human activity can impact our climate can be beyond the ability for most people to understand. But it is possible, even for the scientific community, to convey effective messages that will get the majority of the world’s population to appreciate the gravity of what is occurring. Because if we do not do this, politicians who are determined to prop up the fossil fuel industry and argue against a transition to renewable energy can easily sway public opinion by dismissing human-caused climate change as a hoax and deny it exists. The scientific community needs to rise to this challenge by communicating effectively and emphatically to the broader community about the threat that climate change poses, and how renewables can be and are already becoming the solution. The March for Science is a start, but there is much grassroots work to be done, and this work requires the active engagement of the scientific community working at many levels of advocacy and outreach.

ISES has a 63-year reputation for promoting and petitioning for the continuation and expansion of renewable energy R&D; today, however, like many similar scientific organizations, ISES must step forward with a renewed commitment to support and advocate for a strong renewable energy enterprise.  We are doing this not only with our strengthening scientific outreach activities (webinars, conferences, Solar Energy Journal) but also by partnering with other organizations that are well equipped to carry out the needed advocacy , such as the Global 100% Renewable Energy Campaign (now a “Platform”), the Global Solar Council, and the IRENA Coalition for Action (see all of our Global Partners).

A key benefit of your ISES membership is that ISES is now formally allied with these organizations; these alliances support the goals of the March for Science by bringing well-founded technical information in clear and understandable ways more broadly to society and to decision-makers “…to enact evidence-based policies in the public interest”.